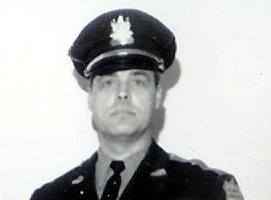 Born in Philadelphia, PA, on March 11, 1927, Mr. Marine was the son of the late Jesse V. Marine and Geneva Thomas Marine.

His family later moved to Delaware, where he attended Seaford High School. In 1944, Mr. Marine lied about his age-17 at the time-in order join the US Army. Assigned to the Air Corps, he served bravely in the Pacific Theater with the Seventh Air Force. He was honorably discharged from military service in 1946.

Mr. Marine enjoyed a 23-year career with the New Castle County Police Department, retiring as a major in 1977. He was a former member of the Fraternal Order of Police, Lodge #5. A gifted woodworker, he was also an avid outdoorsman throughout his life.

He was preceded in death by his beloved wife, Virginia L. Berry Marine, in 2007. He is survived by his 2 children, Michael T. Marine and his wife, Patricia P., of Newark, DE; and Susan M. Vandegrift and her husband, David, of Wilmington, DE; brother, Floyd D. Marine of Phoenix, AZ; 3 grandchildren, Rebecca L. Beamer and her husband, Justin, of Elkton, MD; Michael T. Marine II and his wife, Ruthie, of Middletown, DE; and Virginia L. Vandegrift of Wilmington, DE; 5 great grandchildren; and 11 nieces and nephews.

The funeral service and interment will be held privately and at the convenience of the family.