With winds howling and temperature dipping in to the teens these brave souls braved the elements to renew their permits. This first group was there when the Range opened at 0800 hrs and many more came before the Range was closed at 1400 hrs.

Next year... we have to try for a mid-May shooting date.... please!

FIRST DEPARTMENT IN THE STATE

TO QUALIFY IT'S RETIREES

UNDER THIS NEW LAW

responded to the notice sent out by County Police Colonel  Dave McAllister,

notifying them that the County Police Department was complying

with the new federal law by staging a qualifying course

for those that want to participate in this program.

Going further then the law now requires, the Colonel ran a refresher course

to up-date those Retirees that have been away from the job for some time.

Everyone was brought up to date on the latest laws and

a new department policy was developed just to fit

the new law requirements for Retirees.

The Colonel supplied the Range Instructor and has issued new

with the notice of  "HR218 Qualified" inscribed. 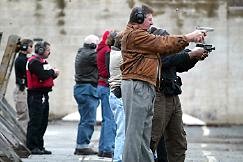 Even Delaware State Representative Bill Oberle (above) tried his hand at qualifying...

Those other County Police Retirees that want to qualify

here is a bit of information that I found

to help you acquire your permit.

TO ALL OTHER RETIREES, FROM OTHER DEPARTMENTS,

and see if they will issue you a Retiree ID card that complies with the HR218 Law.

(picture, signature and date of retirement)

There is a Professional Certified Firearms Training Officer in Dover

that will qualify you at their indoor pistol range

and issue a certificate for passing the course.